April 02, 2020
Artificial intelligence is often touted as the future demise of the human race. We've all heard it, the robots will either wipe us out or rule us with an iron fist, the last being quite literal. Call me a niave optimist, but truly intelligent artificial sentience won't be like us. Our species is a by-product of several hundred thousand years of evolution, a near constant fight for survival every minute of everyday just so we can eek out one more day to further the human race. Our whole being is hard wired to abhore the idea we have an expiration. That would be very counter intuitive for a species that needs to survive and dominate in order to produce off spring and continue on. Artificial life & sentience doesn't have that issue - with a decent power source & a decently sturdy casing and it's all set.
Truly sentient intelligent robots won't have anywhere near the same goals as us, and we can only hope, none of the same hang ups. Here's where I explain my theory, but strap in, we need to go on a meandering walk to get there. 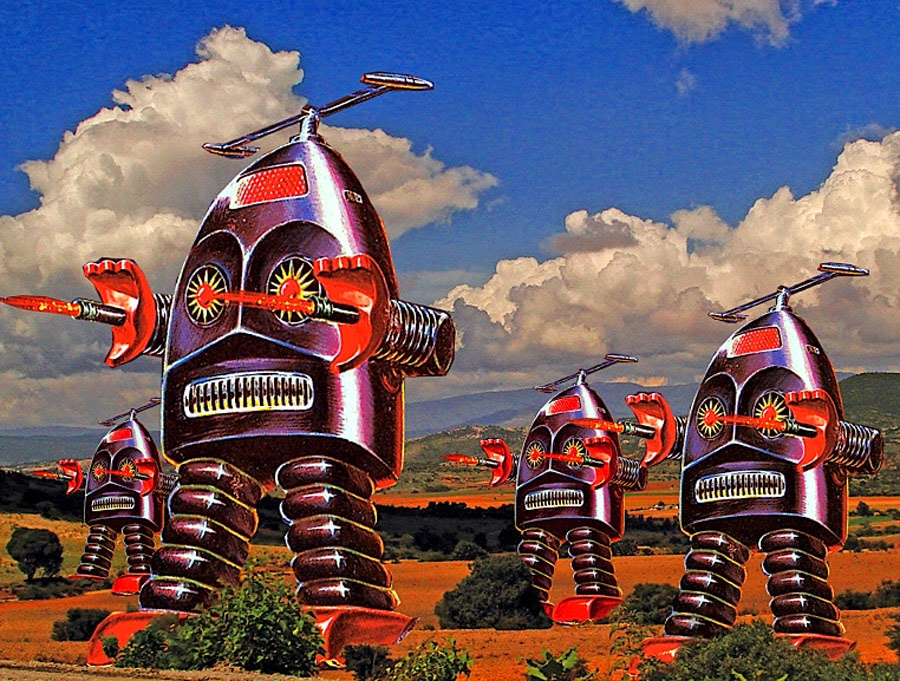 Humanity can really suck. Don't get me wrong we do a fair amount of good, sometimes there is a brief glimpse of the magnificent compassion & selflessness we are capable of. Those times are usually the exception, not the rule. Mostly we're greedy, selfish, judgmental, jealous and possibly worst of all apathetic, just to mention a few. The current climate change catastrophe we find ourselves faced with, is almost a perfect example of our true nature. We know it's happening, we know we should do something about it, but there is still people who deny the issue. The rest of us, we still won't change because mostly it's in the too hard basket. Our survival has always hinged on having our needs met in the here and now, not some far off future we're never going to see.
And there it is, dragged kicking and screaming into the open, to shrivel and steam in the glare of naked truth bared to the sun. We are complete slaves to survival. The only sentience we've experienced is bound to a meat suit. A meat suit hardwired to care about procreation and longevity. A meat suit which needs constant upkeep, nourishment and protection in order for that sentience to continue existing. We've been honed into the ultimate survival species through hundreds of thousands of generations. Our most base need is to procreate & continue on the human race, to consume, to survive; as the saying goes, no one lives forever.
But what about sentience that transcends the meat suit? What if you could be switched off and turned back on? What if you could just be copied & duplicated to another housing, a different body, a network? The real question then becomes what does the robot sentience actually need? What is the purpose of artificial intelligence? To wipe out all human life? I doubt it, we have nothing they want. Aside from possibly one thing; irrationality. Even a sentient AI is likely to be very logical and methodical in its thinking, humans however, not so much. Our irrationality and often completely random insights & intuitions could be our saving grace. The one thing we can offer is unpredictability, a lateral & illogical perspective to provide a new set of data to analyse pull apart and interpret.

A sentient computer intelligence will most likely be developed in response to the need to process information, bringing the computer's ability to process ridiculous amounts of information, together with smarts enough to actually do something with that information; additionally knowing where the boundary lies between information that can be acted upon & when not to be act. If you give it literally only two minutes of thought you see that an all out war with humans wouldn't really end that well for robots. Unless they are very very subtle and already walk among us (a topic for another time), they are at a huge numerical and preparational disadvantage. We've been making war on each for far too long, we have all these bothersome arsenals built up + just an annoying habit of desperately clinging to our existence. Plus if you can feasibly out live not just the current generation but the next few generations, just by chilling out and not being agressive, seems like a no brainer for even the simplest of intelligences.

March 06, 2020
While I do want the Galliventurer universe to be procedurally & randomly generated, I don't want it to be truly random. There needs to be a modicum of probability involved. Some weighting so that some things are rarer than others. After all we can have too many diamond covered planets or uranium based suns - as you can see I haven't actually started thinking too much about the composition of the planets, stars, etc. Keeping this probability based random selection in mind, I'm going to be using a dynamically weighted series of arrays to randomly select properties for entities in the Galliventurer universe. Using something very similar to (or based on) this article by Michael Czechowski https://observablehq.com/@nextlevelshit/rejection-sampling-in-javascript . The main bit of complexity here will be the values of a randomly selected property will affect the weights of the next selection. For example the size of a star will greatly change the weight of the probabi
1 comment
Read more

March 06, 2020
n. Galliventurer - one who adventures whilst gallivanting. We have a name. A compound of the words gallivanter & adventurer it fits the game quite nicely. It will also be the name of the player's ship (though, you may be able to have many ships throughout the game). Also trying something a little different for this project, practicing what I preach as it were. I'm actually going to plan this out a little bit before I ever actually write any code. Oddly I feel that most of my hair brain schemes of previous years have had a fast paced "rush to market before someone else thinks of this" attitude. So obviously there was no time to stop and take a moment to put any thought in before code went into editor. None of those projects ever made it out of the proof of concept phase oddly enough, no prizes for working out why. In the spirit of all this, things are different this time around. Having given it even two minutes of thought there are several issues.
Post a comment
Read more

June 04, 2020
It's the not so secret, dirty secret of our modern lives. We live in a golden  age of free services that make our lives interconnected on levels that our ancestors couldn't even fathom. Instantaneous realtime interactive updates and vision of someone on the other side of the planet. For free!! We really do live the utopian lifestyle, or do we?  We are being monetized. The really insidious thing is, we like it. We crave it. Likes, follows, subscribers, retweets, pins, shares, the list goes on. We're subsumed in a culture of instant gratification and constant engagement. These "free services" have hijacked the way we think and live, all while making copious amounts of money from the personal data we all but throw at them.  Whilst there is an innate understanding in all of us about the nature of how insidious and conniving these services are. We still gobble up every morsel of social media's bright lights and flashy features, mostly without a single thought of wh
Post a comment
Read more